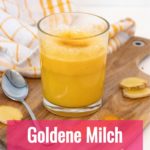 Want a slightly different take on the classic golden milk? Then you should try the version with fresh oranges. Here you can find a delicious golden milk recipe with orange juice!

The golden drink is very healthy, but I couldn’t quite get used to the milk version. It doesn’t matter whether it’s animal milk or plant-based drink, whether it’s warm or cold.

And then I discovered something that tastes really good: golden milk with orange juice instead of milk.

The drink contains all the healthy ingredients found in the classic recipe. And even more. Because oranges contain a lot of vitamin C.

The great thing about this variant is that the drink can be taken cold. It’s super refreshing on hot summer days and a great vitamin boost after getting up.

But let’s look at it in detail.

What is golden milk?

But the recipe for golden milk is not so new. It has long been used in the traditional Indian healing art of Ayurveda and is considered a healing, stimulating and cleansing drink.

Orange milk has been a part of Indian cuisine for centuries.

The main ingredient is turmeric. The root of the turmeric plant contains up to 5% essential oils and the natural dye curcumin. This is why golden milk has such a beautiful golden yellow color. Hence his name.

In Ayurvedic medicine, turmeric is considered one of the “hot spices” that is said to have purifying and invigorating effects.

But since Golden Milk is a typical Ayurvedic spice blend made with quality ingredients, it naturally contains even more good stuff. 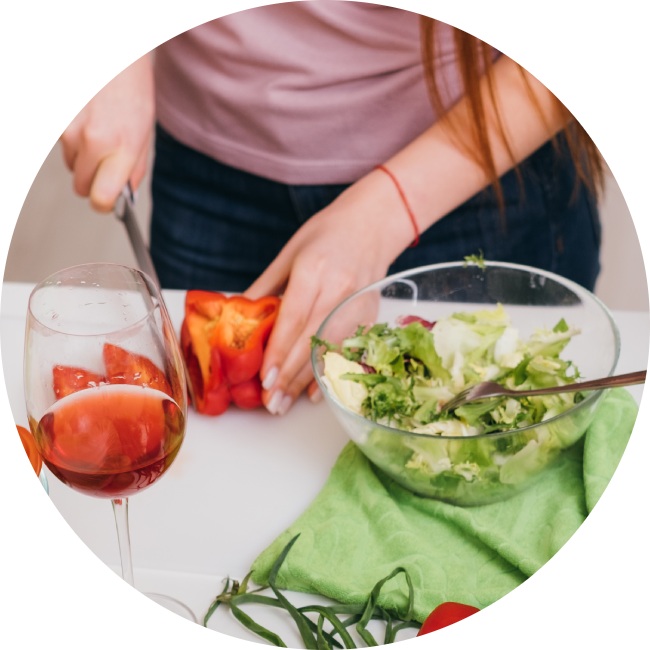 Want to improve your cooking skills? Masterclass online cooking classes allow you to learn from the pros. Find the right cooking class for you now! Learn from the best luminaries online. With the best cinema quality videos. Available anywhere, anytime.

These ingredients ensure that golden milk has many more beneficial properties.

Why is golden milk healthy?

Golden milk has a strong anti-inflammatory effect and is said to protect against joint diseases. It is even said to relieve chronic inflammation such as osteoarthritis.

Turmeric milk is also said to strengthen the immune system and has antioxidant effects. It can prevent premature aging of the skin.

In addition, golden milk stimulates liver function and supports the body in digestion and detoxification. It also has long-lasting physical and mental effects. It protects against Alzheimer’s disease and is a good solution for sleep disorders.

What are the ingredients for golden milk with orange juice?

Finally, the modification is based on the classic recipe. Everything is the same except changing the milk. However, before I get to the recipe, I would like to say a few words about the individual ingredients.

Orange juice is the healthiest when freshly squeezed. The supermarket versions are also impressive, but they are heated at high temperatures and thereby lose some of the vitamins. To compensate for this, many juices have re-vitamins added. The DIY version is healthier and more natural.

You can meet your daily requirement of vitamin C with two to three fresh oranges. It is important for an intact immune system, strong bones and connective tissue. Citrus fruits are also high in magnesium and calcium.

There are many recipes for golden milk – with orange juice, milk, oat milk, etc. But what they all have in common is a good portion of turmeric. And for good reason: because turmeric is incredibly healthy and good for our immune system.

The active ingredient curcumin is anti-inflammatory and is therefore used to prevent many diseases. The yellow powder has an antioxidant effect and works against free radicals that damage our cells. It is also said to significantly reduce the risk of brain diseases.

The tuber not only gives the drink a slightly spicy note, but also strengthens our immune system in several different ways. The healthiest ingredient is gingerol, which by the way is also responsible for the taste. In addition to vitamin C, you will also find magnesium, calcium, iron, potassium, sodium and phosphorus.

That’s why ginger should not be missing in any golden milk – whether with orange juice or milk.

If desired, you can use ginger powder. You will find a more intense flavor and healthier ingredients in a fresh tuber.

If you’re a big fan of ginger, you should also try this ginger shot recipe!

A pinch of cinnamon is a must in the golden drink. Here you should make sure that you use Ceylon cinnamon, it is a little more expensive, but also healthier. In particular, you will find a lot of eugenol in the powder. It is said to have cell-protective properties.

Cinnamon has a very good effect on our body in general. It is anti-inflammatory, antioxidant and antibacterial. It is also said to reduce the risk of cardiovascular disease.

It is also welcome to add a little cardamom to the drink. Its essential oils soothe the digestive tract, relieve cramps, help with gas and stimulate digestion.

Freshly ground pepper should be added to the golden milk. It gives a little more spice and supports digestion.

If you make golden milk with orange juice, coconut oil adds an exotic flavor and a little creaminess. Too sour juice can be sweetened with a little honey. Honey is considered very healthy if it is not heated. It can develop its full power in a golden potion. If you want, you can do without coconut oil and honey.

Did you set up all the ingredients? Then you can start mixing the drink.

Here is the classic recipe for golden milk! 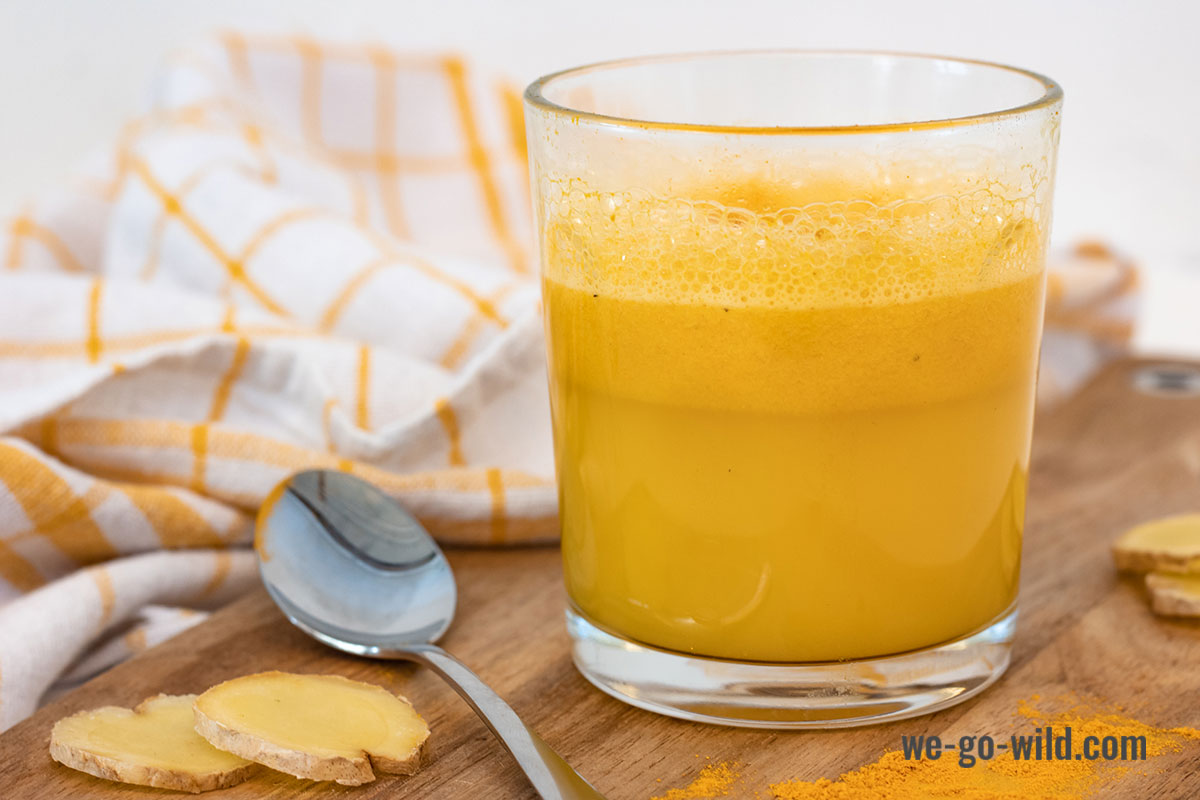 This is how you can make golden milk with orange juice

are you ready Then you can start right away. If you’ve never made your own golden milk, here are the step-by-step instructions. If you’ve made it before and are just looking for some recipe inspiration, you’ll find a short version at the end of the article.

Here is the long version with detailed step-by-step instructions. The recipe is enough for one glass.

3-8 oranges is a very imprecise number. However, it is difficult to determine the exact amount of fruit juice. You should get 200-250 ml of orange juice in total. Sometimes two oranges are enough.

Halve the oranges and squeeze them out. The fresher you make the orange juice, the healthier the drink. If you like, you can then pour the juice through a sieve to remove the pulp.

Put the juice in a tall container so we can immediately mix it with the other ingredients.

You can use a food processor or an immersion blender. Personally, I prefer a blender because it requires less washing.

Hint: If you want to drink golden milk for refreshment, put the oranges in the refrigerator for an hour beforehand.

Peel about 1 cm from the fresh ginger root. The best way to do this is to use a teaspoon and just scrape off the peel.

Place the ginger in a garlic press to squeeze the juice out of the onion. If you are using a food processor, you can skip this step.

Now ginger juice is added to the orange juice.

Tip: If you want, you can also mix ginger powder with orange juice to get golden milk. About 1/2 teaspoon is enough for this.

Add turmeric, cinnamon, cardamom and pepper to the orange juice.

If you want, you can now add honey and coconut oil. You should heat these two ingredients briefly in the microwave so that they liquefy and mix better with the rest of the ingredients.

Then puree the juice again.

Pour the golden milk into a glass with orange juice and drink it immediately. If you want to drink it later, don’t forget to stir the ingredients again with a spoon. 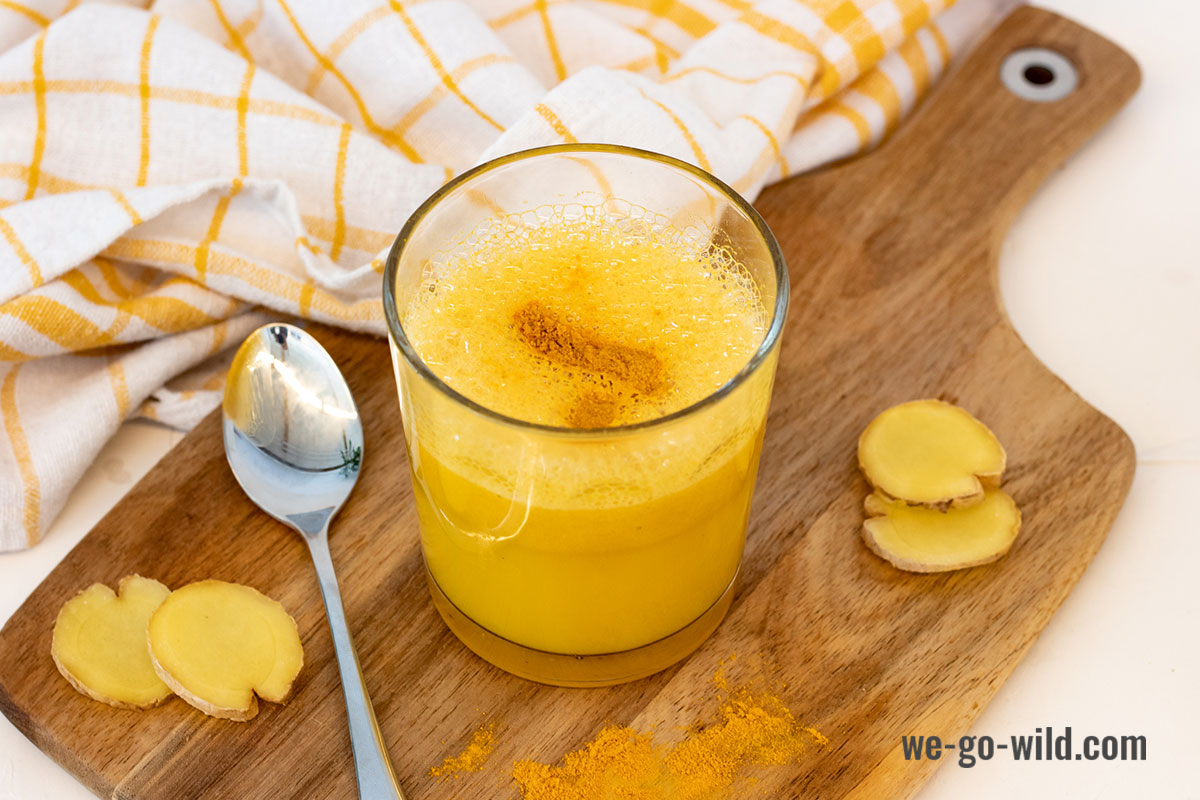 Can you drink golden milk in the evening?

You don’t have to finish the whole drink now. If you wish, you can drink golden milk in the evening before going to bed. All ingredients are soothing and non-stimulating.

However, many people have the problem that they cannot tolerate orange juice and fresh fruit right before bed. Here, the option with milk would be clearly more digestible.

Can you drink Golden Milk every day?

The stimulating spices speed up the metabolism and the orange gives a vitamin C kick. Since golden milk does not contain sugar or other unhealthy ingredients, you can drink it in normal amounts every day. A glass of 150-200 milliliters per day is perfectly fine.

But pay attention to how your stomach reacts to fresh orange juice. Some snakes are very sensitive to it and therefore should not be fed daily.

And here, as promised, is the short version of the recipe.

On hot days, the drink tastes best chilled from the fridge. Coconut oil should only be added at the very end, otherwise it will solidify in the drink. Or you just leave it out.

You can keep golden milk in the refrigerator for 2 days.

As you can see, making golden milk with orange juice is very easy. In just a few steps, you can mix up a vitamin shot that’s pretty impressive with this recipe. The drink tastes delicious chilled and provides refreshment on warm days.

To continue browsing, do the following: